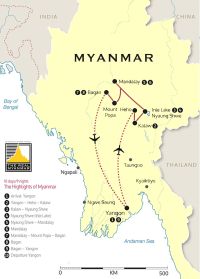 This tour introduces the inspiring towns, culture and the real taste of authentic people throughout the whole country.

Arrival at Yangon. On arrival, you will be welcome and transfer to downtown with a brief introduction enroute.

Check in at hotel.
Start your exploration of Yangon with a walking tour taking in some of the best examples of the city’s wonderful colonial architecture, the lovely Mahabandoola Garden and Independence Monument as well as the lively Indian Quarters.

Later this afternoon, take a walk along the promenade of Kandawgyi Lake.
Finally, end the day at the magnificent Shwedagon Pagoda, Yangon’s crowning glory.

Flight to Heho and continue to Kalaw.

Transfer to airport for flight to Heho (1 hour flight).
On arrival at Heho, scenic drive to Kalaw, a former British hill station tucked amid the Shan Hills. Enjoy the cool, refreshing air and relaxed atmosphere of this charming town. Afternoon at leisure to explore the town.

Met up with your trekking guide at hotel for your 2 day trek from easy to moderate in the hills beyond Kalaw, hiking amidst beautiful landscapes and remote hilltribes - a special experience of culture,nature and daily life.

Trek from Kalaw to Inle Lake by passing from one village to another will give you a tremendous perspective of live here – without judgement only watching to understand and staying present to take in every moment. Traverse gentle rolling green hills peppered with farms and villages. Stop in hill tribe villages such as Danu, Palaung , Pa Oh, where the way of life has remained untouched by time. Along the way we stay overnight in home stays with local families who will also cook for you delicious homemade Shad food. Each day will involve around 5-6 hours of trekking up/down the hills and through the valleys. A night stay at  the village.

Your 2 days trek towards western part of Inle Lake.

After breakfast, we say good bye to villagers and start trekking by passing through fields of vegetable and another two or three villages. The trail goes up and down through beautiful scenery.

On arrival at jetty, we will enjoy leisurely lunch. Then,board to Inle Lake by boat by enjoying scenery beauty of lake and mountain.

A fascinating insight into life on the waterways of Inle Lake, passing fishermen famous for their curious ‘leg-rowing’ technique and lush ‘floating gardens’.Visit the region’s morning market,the Phaung Daw Oo Pagoda, the lake’s main sanctuary and some villages known for their local crafts.
Cruise along foliage cloaked canals to the lakeside village of In Dein in the afternoon. Explore the ancient stupas of Nyaung Ohak and Shwe Inn Thein Paya. The structures date from the 17th and 18th centuries and while some have been restored.

Depart Nyaung Shwe on your 6 hour drive to Mandalay following a narrow hilly road through the evergreen Shan Hills offering picturesque vistas of local villages and a lot of activity planting or harvesting the crops depending on the time. On the way, visit Pindaya with its complex of multi-chambered caves filled with hundreds of Buddha relics.

Then, continue to Mandalay via Ywa Ngan road.

The views are pleasant – a mixture of palm trees, villages and paddy fields dominate the landscape. If time permits, witness Blue lagoon (small pond) and Tawkyae water fall. Another stop at local coffee product to learn about coffee plantation and processing.Of course, we can also enjoy the taste of Shan local coffee.

We first visit Mandalay Hill for some wonderful views of the city. Then, continue to Shwe Nandaw Kyuang or ‘Golden Palace Monastery’ noted for its intricate wood carvings, Kayuktawgyi Pagoda with its huge marble Buddha and Kuthodaw Pagoda, home to ‘The World’s Largest Book’, a collection of some 729 marble slabs inscribed with Buddhist teachings.  Continue Mandalay sightseeing in the afternoon to Mahamuni Pagoda, home to a spectacular Buddha image covered with thick layers of gold leaves. Stop at local workshops to see Kalaga tapestries being made, gold leaf being beaten into paper-thin pieces. Afterwards, take a short drive to the ancient royal capital of Amarapura to see the world's longest teak bridge to catch a memorable sunset over Taungthaman Lake before heading back to Mandalay.

Day 8 - A scenic drive from Mandalay to Bagan and the wonder to Mt.Popa

Set off for a scenic journey towards Bagan.

This road takes you through the dry-zone of Myanmar – in summer brown and deserted – in winter green with rice fields. Witness local activities on the bus and scenery of Myingyan plain & white temples.
Make a stop at Mt. Popa, a 1,518m high extinct volcano to enjoy wonderful views of the surrounding area Arrive at Bagan in time for sunset.

Enjoy spectacular views of the ancient Kingdom of Bagan in your hot air balloon about one hour![Available from Oct to end of Mar], Back to hotel by balloon shuttle bus.

After refreshing up, your discovery in Old Bagan begins with some of the site’s most important monuments such HtilominloTemple, , one of the greater temples of Bagan, Ananda temple, an architectural masterpiece, built 1105 AD in the early Mon-style, Ananda contains two unique Buddha images whose expressions seem to change depending on the distance and angle from which the statues are viewed.

Continue to Thatbyinnyu Temple standing within the city walls, rises to a height of 201 feet above the ground and overtops all the other monuments, Gubyaukgyi Temple which dates back to the 13th century AD and Sulamani Guphaya Temple.
You will return to your hotel for a couple of hours to escape the hottest part of the day.
Later this afternoon, end the day atop a pagoda which affords a magnificent sunset view of Bagan's temple studded plains.

Day 10 - Fly from Bagan to Yangon. Further exploration in Yangon

Transfer to the airport for morning flight to Yangon.

On arrival at Yangon, transfer to down town. walking tour around colonial downtown. Visit Secretarial office, take a walk along the Pansodan road towards Strand road to see old colonial buildings such as Port Authority, Post office and Commercial Bank.  Afterwards, continue to the famous Scott Market (closed on Monday and public holidays), a sprawling complex built in 1926 and noted for its variety of handicrafts, art galleries and other items which provides an excellent opportunity for a shopping spree .
Later in the afternoon, a transfer to brilliant China town to experience local street foods in the road side market.Try a range of local delicacies with a couple of local beer and soak up Yangon’s atmosphere at night.

Transfer to the airport for international departure flight.

If you have a late departure you can enjoy another half day on your own in the "old capital".

Locate us on map